The closing session of discussing the Kyoto Protocol and a second commitment period to emissions cuts: the text on the table seems to be for 2013 to 2017.

Parties are complaining they do not have the text under discussion. They are not drafting text here, but chair is getting reactions to the current draft text.

Discussions amongst ministers have been ‘transparent’ which means that all ministers were as far as possible in the same room overnight and today.

There doesn’t seem to be a text in any language other than English, a huge disadvantage for many, many negotiators.

Bolivia saying numbers on reductions are not clear enough, and saying that certain parties do not seem to have offered commitments.

‘I think management of SA was not the best. But at the same time, they’ve had to deal with outstanding issues from many years.’ 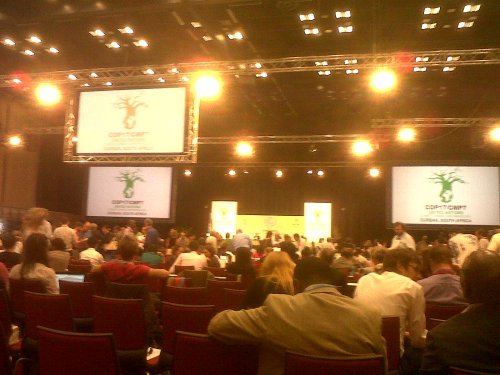 One response to “Closing plenaries?”